I recently visited Angel Island for the first time. Located in the San Francisco Bay, it was used as an immigration and quarantine station and a military base continuously from the Civil War era until 1963. Many of the old buildings are still standing.

It's about a 3.5 mile hike from the ferry to the visitor center and museum. The center itself was interesting, but I was smitten by the ramshackle buildings.

Walking into what had been the compound is an eerie experience. It feels a bit like a slot canyon, with tall, drab mustard colored buildings lining both sides of the street. At the top of the hill, the museum sits squarely. It comes complete with a pervasive smell of mildew and a very engaging docent.

There are huge holding cells and cot-sized single cells occupying one end of the building. We were free to roam through the cells, to stare at the names and numbers carved, in various languages, upon the wall, and walk through several rooms of memorabilia. There are many, many photographs of Chinese and Filipino immigrants, along with history about the Miwok and Spaniards who were earlier occupants. WWII and the Pacific Theater occupy a big piece of the museum and the history of Angel Island, and there are pictures of young, nameless Filipino and Japanese men and women occupying one large wall.

When I strolled back out through the compound, I was really intrigued by the Postal Exchange, with a date plaque "1910." I went from thinking about numbers to wondering about all the letters that had passed through here, and all the writers of letters. As a sender and recipient of much actual snail mail (thanks to all my artist friends), I was really taken with this building.

What really struck me was the faded gold colors of the walls. Angel Island was bigger than Ellis Island in New York and designed primarily to control the flow of Chinese immigrants into the United States. Considering that so many Chinese people had earlier come in search of "Gold Mountain," I found the color haunting. Angel island felt like a place with a lot of ghosts.

Here are a few of the pictures I took while there. First is the hospital, which was used until 1963 and was the last building used on Angel Island. Then there are interior shots of peeling paint and a crumbling staircase. I loved this decay. It felt like the island was slowly reclaiming itself. There's also a picture of a wooden structure that was once a barracks. There's a shot from the top of the island looking out at the bay. It was an unusually clear day in San Francisco, so this view was a real privilege.

Finally, here's a piece I made from a picture of the postal exchange. This is a 5x7 canvas board with ocher and white acrylics, various Distress inks and matte gel medium and stamping. I stamped and sanded off two layers of images before painting. This wasn't intentional, but I like the ghostly images.

This is on its way to Petra, who got a very long story to go with it. :) 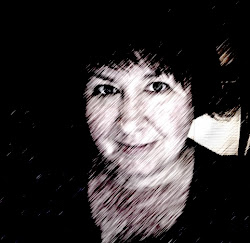